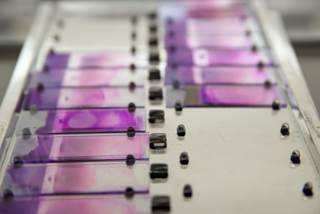 Perspectives differ on whether ponatinib is a niche drug that should be reserved for younger patients.

Adi Shacham-Abulafia, MD, of the Davidoff Cancer Center in Israel, and colleagues conducted a small retrospective study to examine the safety and efficacy of ponatinib in a real-world population. They found that 85% of patients responded, with almost half achieving a major molecular response.

Based on these results, the researchers concluded that ponatinib is a “niche drug” that should be “reserved for a unique population of exceptionally young patients with CML with or without the T315I mutation.”

According to the study, widespread adoption of ponatinib has been slow because of safety concerns associated with the drug.

Ponatinib was originally approved by the US Food and Drug Administration (FDA) in December 2012 in its accelerated approval program, but development was halted by the FDA in October 2013 in order to investigate adverse events associated with the drug.2

“Ponatinib was put on hold by FDA for the increased risk of cardiovascular events,” Massimo Breccia, MD, of Sapienza University of Rome in Italy, told Cancer Therapy Advisor.

In 2016, ponatinib received full FDA approval for adults with chronic-phase, accelerated-phase, or blast-phase CML for whom no other TKI therapy is indicated and in patients with T315I-positive CML.3 The full approval was based on 48-month follow-up results of the phase 2 PACE trial, which showed that 55% of the patients with chronic-phase CML had a major cytogenetic response. In the study, serious arterial thrombotic events occurred in 9% of patients and were considered related to drug treatment in only 3%.4

According to Dr Shacham-Abulafia and colleagues, there are limited data about the use of ponatinib outside of clinical trials. To characterize patients treated with the drug and information about dosage, efficacy, and safety, they looked at data from 37 patients with CML who received ponatinib at one of 7 medical centers in Israel between 2011 and 2016. Twenty-one patients had chronic-phase disease and 16 were in the advanced phase; 26% of patients were T315I-positive.

According to Dr Breccia, younger patients may have been preferred by clinicians in these real-world settings because of the cardiovascular profile of ponatinib.

“The cohort of patients enrolled in clinical sponsored trials usually were selected for specific inclusion criteria based on [the] specific safety profile of the drug,” Dr Breccia said. “Usually, for example, the elderly category did not receive the drug. Real-life cohorts represent what we treated in clinical practice without selection.”

Dr Breccia said he disagreed, however, with the statement that ponatinib is a “niche drug.” In a similar retrospective study, Dr Breccia and colleagues looked at ponatinib as a second-line treatment in 29 patients with chronic-phase CML with resistance or intolerance to prior TKIs.5 The median age of these patients was 54. Here, 85% of patients improved their level of response compared with baseline, and about one-third of patients achieved a deep molecular response. No thrombotic events were recorded.

Dr Breccia and colleagues concluded in that paper that “ponatinib seems a valid second-line treatment option for chronic-phase CML, in particular for patients who failed a front-line second-generation TKI due to BCR-ABL-independent mechanisms of resistance.”