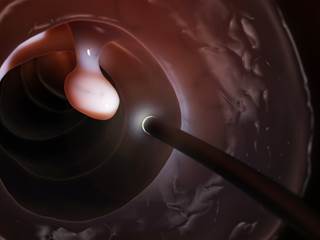 Results from a safety lead-in phase conducted prior to a phase 3 trial examining the safety and tolerability of encorafenib, binimetinib, and cetuximab in combination led the FDA to assign the regimen

The US Food and Drug Administration (FDA) granted Breakthrough Therapy Designation to the combination regimen of encorafenib, binimetinib, and cetuximab for the treatment of patients with BRAFV600E-mutant metastatic colorectal cancer (mCRC) who have failed 1 to 2 previous lines of therapy, according to a press release.1

Patients with BRAFV600E-mutant mCRC have nearly a twofold risk of death compared with patients with wild-type BRAF disease. There are no FDA-approved therapies for this patient population.

The FDA based its decision on data from the safety lead-in of the BEACON CRC phase 3 (ClinicalTrials.gov Identifier: NCT02928224) study, for which researchers enrolled 30 patients to receive encorafenib 300 mg once daily, binimetinib 45 mg twice daily, plus cetuximab 400 mg/m2 initial dose then 250 mg/m2 once weekly.

Results showed that the 1-year overall survival (OS) rate was 62%, but the median OS had not been reached. At the time of analysis, the OS data were fully mature through 12 months. The median progression-free survival (PFS) was 8 months (95% CI, 5.6-9.3), and was comparable between patients who received 1 and 2 previous lines of therapy.

The confirmed overall response rate (ORR) was 48%, and patients who had only received 1 previous line of therapy had an ORR of 62%.

Encorafenib, binimetinib, plus cetuximab is an investigational therapeutic regimen and has not yet been approved by the FDA.