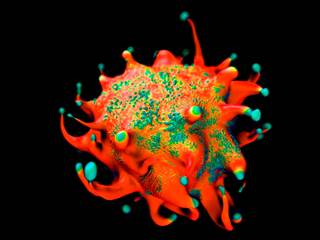 At time of analysis, 14 of the 22 complete responses were ongoing.

Lenalidomide may be an effective option for patients with relapsed or refractory mantle cell lymphoma (MCL), according to a study published in The Oncologist.1

MCL, an aggressive subtype of non-Hodgkin lymphoma, is occurring more frequently, particularly among the elderly. In the past 2 decades, the overall survival (OS) expectancy has increased by only 2.5 years in this patient population.

For this retrospective observational study, researchers evaluated the safety and efficacy of lenalidomide, an immunomodulatory drug with anticancer activity, among 70 real-world patients with relapsed or refractory MCL. The median patient age was 67 years, 72.9% had stage IV disease, 22.8% were refractory to first-line therapy, and about half underwent prior autologous stem cell transplant. About 75% of patients received single-agent lenalidomide; 25.7% received lenalidomide with dexamethasone or rituximab.

Patients received lenalidomide for a median of 8 cycles. The overall response rate was 47.1%, with 22 complete responses and 11 partial responses. Six patients had stable disease. Median OS was 33 months.

At time of analysis, 14 of the 22 complete responses were ongoing.

The authors concluded that “lenalidomide is effective and tolerable in everyday clinical practice, with superimposable results to those obtained in clinical trials, and it must be considered in the therapeutic algorithm of [relapsed/refractory] MCL as a targeted approach.”