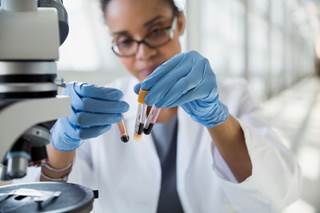 Preclinical models predict that ibrutinib and venetoclax would have a synergistic effect in dual inhibition for mantle cell lymphoma.

Ibrutinib and venetoclax therapy produces a clinical benefit when administered concurrently to patients with mantle cell lymphoma (MCL) compared to both agents alone, according to a study published in The New England Journal of Medicine.1

Although preclinical models predict that Ibrutinib, a BTK inhibitor, and venetoclax, a BCL2 inhibitor, would have a synergistic effect in dual inhibition, both are currently only approved as monotherapies.

For this open-label phase 2 study (ClinicalTrials.gov identifier: NCT02471391), researchers enrolled 23 patients with relapsed or refractory MCL and 1 patient with previously untreated MCL. Patients initiated treatment with ibrutinib 560 mg daily for 4 weeks, then added in venetoclax at increasing doses until a dose of venetoclax 400 mg daily was reached. Approximately 50% of patients had an aberrant TP53 gene mutation and 75% had a high-risk prognostic score. The median follow-up was 15.9 months.

Results showed that after 4 months, the complete response (CR) rate was 42% with ibrutinib plus venetoclax combination therapy compared with 9% among patients treated with ibrutinib monotherapy over the same duration in previous studies (P < .001).

The CR rate, as confirmed by positron-emission tomography, was 62% by week 16 and 71% overall. The minimal residual disease (MRD) was 67% and 38% when assessed using flow cytometry and allele-specific oligonucleotide-polymerase chain reaction (ASO-PCR), respectively.

Commonly observed adverse events included diarrhea, fatigue, and nausea/vomiting, which occurred in 83%, 75%, and 71% of patients, respectively. Tumor lysis syndrome was reported in 2 patients.

The authors concluded that “the results of our study, which used a historical cohort as a control, are consistent with the notion that the combination of ibrutinib and venetoclax is highly effective in mantle cell lymphoma,” and also noted that a study to confirm the superiority of combination therapy compared with single-agent ibrutinib are ongoing.