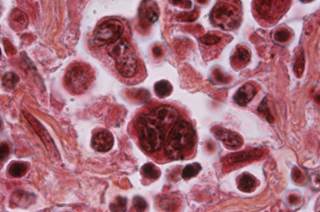 Previous findings showed that patients obinutuzumab plus bendamustine prolonged progression-free survival, but data was immature at the time of analysis.

Obinutuzumab plus bendamustine (G-B) significantly prolongs progression-free survival (PFS) among patients with indolent non-Hodgkin lymphoma (iNHL) compared with bendamustine alone, according to a study published in the Journal of Clinical Oncology.1

For the phase 3 GADOLIN study (ClinicalTrials.gov Identifier: NCT01059630), researchers randomly assigned 413 patients with rituximab-refractory iNHL — of whom 335 had follicular lymphoma (FL) — to undergo induction therapy with obinutuzumab 1000 mg plus bendamustine 90 mg/m2/day or bendamustine 120 mg/m2/day alone; patients who did not experience disease progression in the G-B arm received obinutuzumab 1000 mg maintenance therapy every 2 months. Patients in the G-B arm had a significantly reduced risk of progression of death but did not reach PFS at the time of the primary analysis and data was immature for other clinical endpoints.

The median follow-up for the current analysis was 31.8 months, approximately 11 months longer compared with the former report.

Time to new antilymphoma treatment (TTNT) in the G-B arm (41 months) was more than double the time in the bendamustine alone arm (19 months).

The updated results confirm the earlier findings from the GADOLIN study. The authors concluded that “because G-B prolonged OS, PFS, and TTNT compared with [bendamustine] monotherapy in rituximab-refractory FL, this supports the conclusion that G-B is the preferred option in the treatment of these patients.”