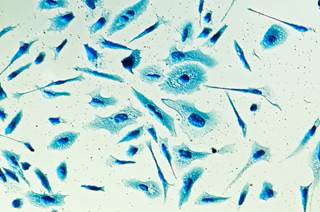 Myeloid-derived suppressor cells (MDSCs) are a driver of castration-resistant prostate cancer (CRPC) in lab mice and humans, according to a recent report in Nature.1 The team showed that MDSC-secreted IL-23 activated the androgen-receptor pathway in prostate tumor cells, hastening their proliferation and increasing their survival rate in the absence of androgen hormone.

“Intra-tumor MDSC infiltration and IL-23 concentration are increased in blood and tumor samples from patients with CRPC,” they reported.1 “Antibody-mediated inactivation of IL-23 restored sensitivity to androgen-deprivation therapy in mice.”

It's the latest evidence that treatment resistance is not simply a result of tumor genome evolution, but a result of the cellular ecology of tumor microenvironments.

“Taken together, these results reveal that MDSCs promote CRPC by acting in a non-cell autonomous manner,” the authors concluded.1 “Treatments that block IL-23 can oppose MDSC-mediated resistance to castration in prostate cancer and synergize with standard therapies.”

The researchers used a Pten-knockout mouse model. Gene-expression assays showed that the gene for IL-23 in these mice was among the most upregulated tumor locus compared with controls.1 Other genes that send signals involved in the androgen receptor pathway, like IL-6, were not upregulated in the Pten-knockout mice.1

“This is a big deal,” said Alexander Kutikov, MD, FACS, chief, division of urology and urologic oncology at the Fox Chase Cancer Center in Philadelphia, Pennsylvania. “The discovery reported in this manuscript is extremely exciting.”

“Charles Huggins won the Nobel Prize in Medicine in 1966 for describing the hormonal dependence of prostate cancer, ushering in hormonal manipulation as the mainstay of advanced prostate cancer therapy,” Dr Kutikov said.

But androgen blockade eventually and “uniformly” leads to a castration-resistant tumor state in which prostate cancer grows despite hormone inhibition, he told Cancer Therapy Advisor.

But tumors eventually evade these treatments, as well.

Page 1 of 3
Recommended for you