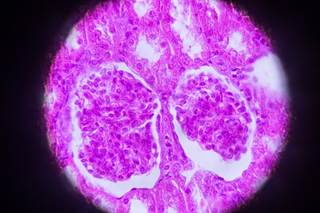 Stereotactic body radiation therapy (SBRT) may be a safe and effective therapeutic option that couold provide localized control among patients with oligometastatic renal cell carcinoma (RCC), according to a study published in The Journal of Urology.1

For this study, researchers enrolled 58 patients with 73 metastatic lesions from primary RCC and treated them with SBRT. Eligible patients had undergone resection of the primary tumor and were diagnosed with a maximum of 3 metastases. The most common sites of metastasis included the lungs (53.4%), lymph nodes (26%), bones (9.5%), liver (4.1%), and adrenal glands (6.8%). The first evaluation was scheduled for 3 months post-radiotherapy, every 3 months for the first year, then every 6 months thereafter between the second and fifth year.

The most frequently observed adverse events included fatigue, pain, nausea, and vomiting. No grade 3 to grade 4 toxicities were reported.

In both univariate and multivariate analyses, metachronous and single metastasis were prognostic for prolonged PFS, and patients with clear-cell cancer who underwent neoadjuvant systemic therapy prior to SBRT had improved localized control.

The authors concluded that “future prospective studies are necessary to evaluate [SBRT's] impact on survival and quality of life. Moreover, a new prospective on the radiobiology of RCC should be considered to better understand the role of SBRT and, particularly, its possible interaction with medical therapies.”